Fix Auto UK’s 10th anniversary celebrations have continued, with the network honouring six further franchisees that joined the then fledgling network a decade ago.

Fix Auto Dagenham were honoured during the summer for being the first franchisee to sign up to the Fix Auto concept, now they have been joined by fellow ‘band of brothers’ Fix Auto Loughborough, Keighley, Bradford and Settle along with Fix Auto Weston-Super-Mare and Cardiff.

From those first signings a decade ago, Fix Auto UK has grown into a network of 76 independently owned bodyshops, supported by a 16-strong head office team, and has secured central agreements with a number of blue-chip insurance customers repairing in excess of 120,000 vehicles annually.

Paul Smith, owner of Fix Auto Loughborough and Fix Auto Advisory Committee Vice Chairman, said: “It is phenomenal to think how far Fix Auto has come in 10 years from a concept.

“It's great to still be part of this and see Fix Auto UK continuing to grow with its original values, with a tremendous team of people who have become fantastic friends. I look forward to the next 10 years.”

Ian Pugh, of Fix Auto UK, said: “As every year passes we continue to lay down major milestones and here we are, in 2015, celebrating the network’s 10th anniversary. We’re at a stage where collectively the network is annually repairing more than 125,000 of vehicles and we have risen to become a major force within the repair industry and it wouldn’t have been possible without the foundations laid by our first franchisees who had the vision a decade ago to sign up to the Fix Auto concept. I for one can’t thank them enough.”

Mark Atkins, of Fix Auto Weston-Super-Mare, said: “I have been with Fix Auto since the very early days when there were just a few of us, everything was on a much smaller scale back then.  It has certainly grown over the years!! The good thing about being a part of Fix Auto UK now is the level of support available within the network from our weekly regional conference calls to the annual national conference, there is always someone available with good advice.” 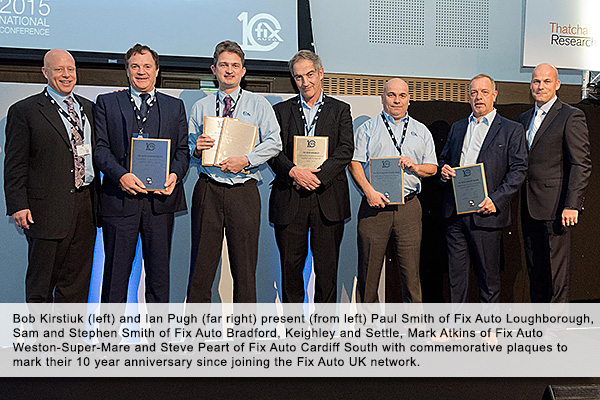 · Fix Auto UK is part of a global franchised network of more than 360 bodyshops.