FIX AUTO UK IS GEARING UP FOR THE REAL RALLY

A team from Fix Auto UK’s head office, a host of seasoned franchiees and colleagues from overseas will be representing Fix Auto UK in the annual REAL Rally charity drive which gets underway on June 27.

Key Accounts Managers Paul Smith and Mark Bushell will lead the way for the network as Team Fix & Furious in their MINI Cooper S. Alongside them will be Phil and Wendy Ewbank of Fix Auto Rochdale, Terry Gilbert, Richard Harrington, Dave Hemmings and Boo Taylor of Fix Auto Stevenage as well as Robert Dearnaley and Danni Aiken of Fix Auto Rochester and Maidstone. Fix Auto Dagenham’s Paul Cunningham and Neil Parker and Fix Auto Manchester East’s Brian Kerrison and his brother, John, complete the Fix Auto UK line-up along.

Jeff Bagley, owner of Fix Auto Las Vegas, and co-pilot Corissa Rigdon, will be taking the wheel of a traditional black cab, as part of the field of 30 other teams spanning the entire vehicle repair industry.

Fix Auto UK’s owner Bob Kirstiuk and his wife, Nickole, will be bringing further international flare by jetting in from their home in Canada in order to represent his sister operation, Advantage Parts Solutions. They will take to the roads behind the wheel of a 1994 Mercedes SL provided by Robert Dearnaley.

The teams will be venturing off on a three-day drive from Telford, taking in the beautiful North Wales and covering some of the greatest driving roads Snowdonia has to offer and staying over in Portmeirion, made famous by the cult TV series The Prisoner, and the historic walled-city of Chester.

The REAL Rally is an integral annual event organised by Autoraise’s Bob Linwood as part of REAL – The Ethan Rees Linword Memorial Fund created in memory of his son. All the money raised will go towards REALfriends in support of bullied children and REALexperience which creates apprentice opportunities for 14-16 year olds in the vehicle repair industry in conjunction with AutoRaise.

Paul said: “The REAL Rally has quickly become a firm favourite in the industry’s calendar! Fix Auto UK is only too pleased to be taking part, particularly as all the money raised will be going to such worthwhile causes. We are thrilled with how our car has turned out, there’s a few final graphics to be added before the start of the rally but then we will be all set!” 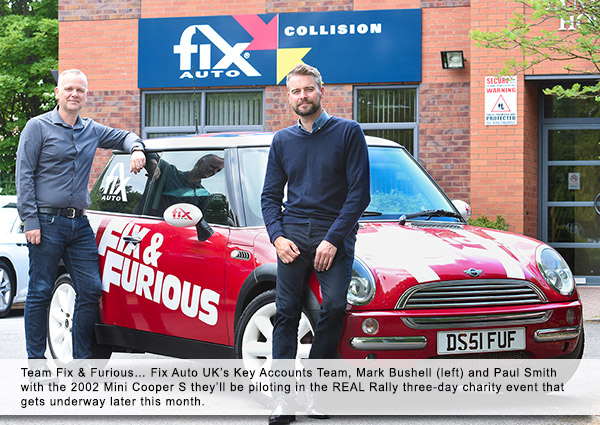