A record-number of franchisees, guests from leading insurance companies and suppliers to the vehicle repair sector were left in no doubt as to how Fix Auto UK is ‘Driving Forward’ during the network’s annual National Conference, held at the Hilton St George’s Park hotel last week.

The event – moderated by the Original BBC Top Gear ‘Stig’ Perry McCarthy - began with an engaging presentation by Fix Auto UK’s Ian Pugh, who announced 24 consecutive quarters of growth for the business, and predicted that the network would deliver £1/4 billion worth of repair work to its franchisees over the next three years.

Fittingly, Ian passed the baton to Olympic medallist and relay champion Kriss Akabusi MBE, who treated almost 300 delegates - including guests from China, USA, Canada and Germany - to an incredibly passionate, animated and rousing motivational presentation.  The 1991 World Champion spoke first-hand about how teamwork succeeds against all the odds, encouraged the audience to look to Millennials for alternative perspectives, and advised everyone to “Dream Big”.

Branding expert Alex Hunter - who oversaw the Sir Richard Branson’s personal digital strategy along with the Virgin Group’s global policy - provided a thought-provoking and colourful insight into delivering a tailored customer experience.  He called this the “WOW” factor and he discussed the direct success that it generates in terms of customer loyalty.  Picking up on this theme, David Wild, CEO of Domino’s Pizza Group, provided the background behind how the UK’s largest pizza franchise has used consumer insight and digital strategies to grow its annual revenues beyond £1bn.

Also taking to the stage was Motor Claims Consultant Ian Guest, who spoke about how a combination of rising claims costs, regulation, and major technological disruptions are forcing insurers to rethink their claims strategies.  Chicago-based industry expert Sean Carey then provided a detailed analysis of the proliferation of connected cars, the emergence of autonomous vehicles, and their likely effect on damage severity and accident rates.

Reflecting on the success of the National Conference, Ian Pugh said: “From the feedback we have received, we have achieved our objective of delivering another inspiring and industry-leading conference.  Thanks to our speakers, sponsors and guests, we were again able to deliver an event we are truly proud of.”

Ian added: “These past six years have been extremely demanding for our industry, demands fuelled by a huge amount of competition and the significant changes throughout the sector. I am extremely proud to report Fix Auto UK has recorded 24 consecutive quarters of continual growth across all areas of the business encompassing network development, repair capacity, market share, brand positioning and revenue.

“Personally, I view the growth as one of solidity and permanence, elevating the network firmly as a leading contender and a hugely viable proposition.  While I attribute our continual success to our core values of honesty and integrity, it has also been achieved by the hard work, dedication and determination of every Fix Auto UK family member.”

Attendees also donated generously, with £4,625 being raised for the industry charity AutoRaise from a raffle which saw the ‘star’ prize of an Apple iPhone 8 – provided by sponsors Autoflow - being kindly placed for auction by its original winner Liz Baylis of Fix Auto UK.  Advantage Parts Solutions and Axalta USA also donated £500 and £1,000 respectively.

Fix Auto UK’s franchisees also had cause to celebrate during the presentation of the network’s annual awards.  Fix Auto Kettering was named as the Fix Auto Bodyshop of the Year 2017, Fix Auto Penzance received the Outstanding Customer Service Award while the Fix Auto Region of the Year was presented to Region 1, managed by Andy Higgs.

Gary Churcher and Tom Hadfield of Fix Auto UK were both named joint winners of the Fix Auto UK Outstanding Contribution by a Team Member award. 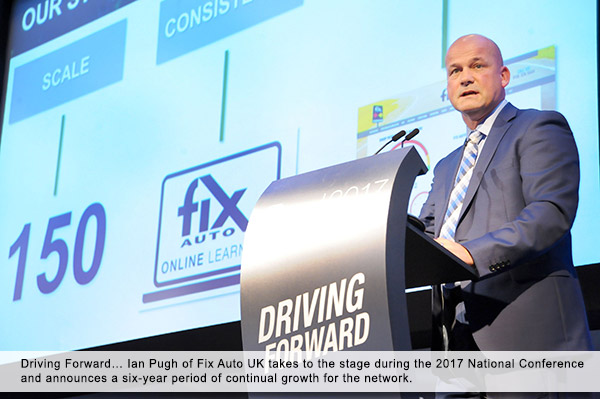 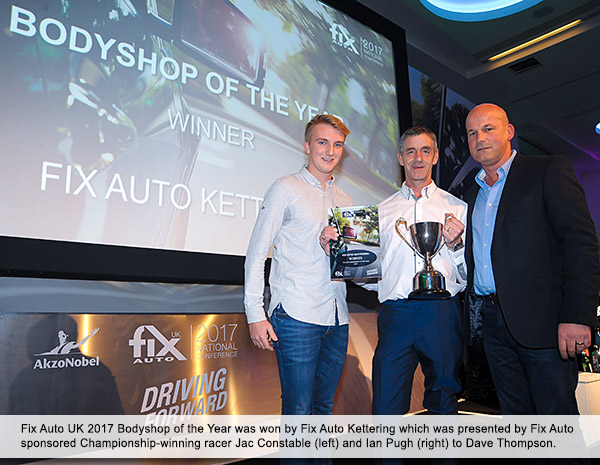