Reflecting its investment in an innovative Online Learning Platform, along with its Performance in Estimating (PIE) and Institute of Leadership and Management (ILM) programmes, Fix Auto was presented with the 2017 Training Provider of the Year award.

The second Bodyshop Awards hat-trick in a row takes the number achieved by the Fix Auto UK network during 2017 to nine, with a total of 27 major industry awards won since 2013.

On collecting the Training Provider of the Year Award, Fix Auto UK’s Head of Marketing Tom Hadfield said: “I am absolutely over the moon and delighted. This award is testament to all our franchisees who have pioneered and embraced the programmes, and our team who have worked tirelessly to ensure the learnings are put into practice.  Thank you so very much for all your hard work in making our training programme the success it is today.”

He added: “In 2016, we embarked on a strengthening of our training proposition and this has continued through 2017.  The ILM Team Skills programme, piloted by three franchisees in the South East and delivered nationally by Anne Howes, has helped to develop the leadership and management skills of more than 70 of our people, while the Fix Auto Online Learning Platform - supplied by our <Connected Solutions> partner Peritus Learning - provides a wide range of content to every team member in our network.

“These new initiatives dovetail perfectly with our existing Performance in Estimating, Performance in Customer Service and Quarterly Business Meeting programmes as we seek to broaden the skills and knowledge of our teams across the UK.”

Ian Pugh of Fix Auto UK said: “Once again the Bodyshop Magazine event was another night of celebration for our network. Winning the Training Provider of the Year award is a significant achievement and reflects our desire to innovate and develop our value proposition for our bodyshops, and in turn enhance our performance for our insurer customers.”

He added: “I couldn’t be more delighted for Stuart and Joel Cameron and their entire team at Fix Auto Penzance along with Phil and Wendy Ewbank and all at Fix Auto Rochdale for their achievements.

“I would also like to congratulate Rachel McGuinness from Fix Auto Croydon and Jade Rogers from Fix Auto Weston-super-Mare - who were both finalists for the Bodyshop Manager of the Year - along with Fix Auto Maidstone - which was a runner-up to Fix Auto Penzance in the Small Bodyshop of the Year category - and Gareth Oakes of Fix Auto Pershore - who was a finalist for the Paint Technician of the Year.  I’m sure they will be back next year to contest again.”

Bodyshop Magazine editor Mark Hadaway, said: “Although Bodyshop Magazine has no say in who wins the awards, the standard of nominations is always extremely high. All the award winners will have gone through rigorous independent assessments and to be successful they must really stand out in the eyes of the independent panel of judges. We would like to congratulate Fix Auto UK for its success in the Education and Training Provider of the Year category. Skills is an acute issue impacting the entire industry, and the more companies that take a proactive approach to tackling it head on, the better off we will all be.” 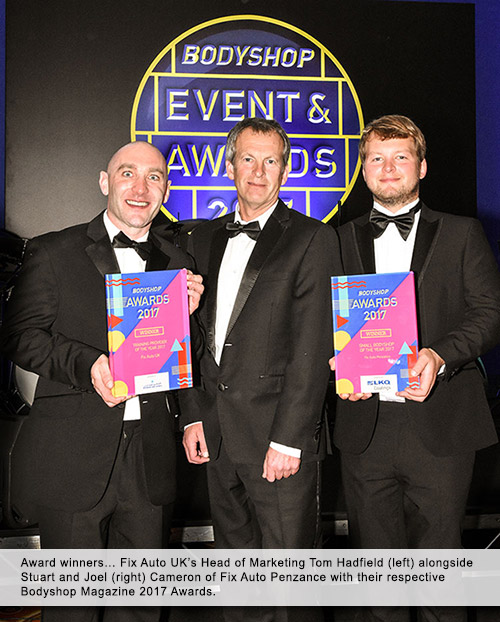