FIX AUTO UK ACCELERATES ITS PRESENCE IN THE MOTORSPORT ARENA

Fix Auto UK’s brand profile continues to fly high after the network sponsors the hi-octane Power Maxed Arenacross UK Tour that gets underway at the Manchester Arena this weekend.

Following on from the success achieved in supporting Jac Constable, who won the 2017 Ginetta GT4 Championship and ensured the network’s branding was regularly featured on national TV. For the next two months, Fix Auto UK will be heavily featured during the AX Tour as it travels around some of the UK’s leading venues.

Heading into its sixth year, AX has always been an international affair with world-class athletes from around the world travelling to compete on the hottest indoor tracks in the UK. Amongst this the Freestyle Motocross shows will take place 40ft above your heads. The AX Freestylers go above (literally) and beyond to engage you in a show packed to the brim with whips, flips and tricks.

Fix Auto UK’s branding will be displayed in the arena advertising in addition to having an official partner profile on the Power Maxed Arenacross website. It will also benefit from social media coverage generated by the 70,000-plus Arenacross social media followers.

Ian Pugh of Fix Auto UK, said: “We are always seeking new and innovative ways in which to raise our profile. Over the next two months, Arenacross will provide us with a hugely exciting platform to reach a new audience. I am excited at the prospect of seeing the Fix Auto brand at some of the UK’s leading venues such as Wembley Arena, Manchester, Birmingham and Newcastle.”

To find out more about the Power Maxed Arenacross Tour visit: http://www.arenacrossuk.com/ 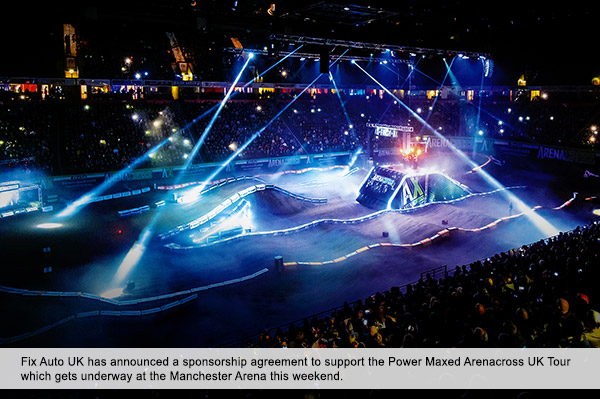 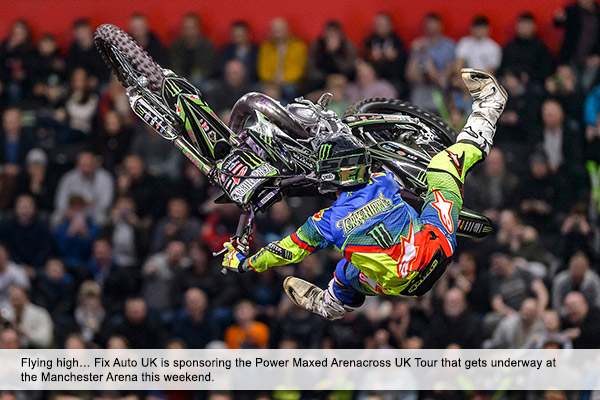 The Arenacross Series Dates during January and February: