Santa will certainly be delivering his presents in style this Christmas, thanks to the charitable exploits of Fix Auto Slough owner Ranjit Gill and his team.

The Berkshire-based businessman answered an SOS call from the Maidenhead Round Table charity to help to put the finishing touches to a new sleigh that will be used to tour the region and raise thousands of pounds for local causes during the lead up to this year’s festivities!

Ranjit was first contacted by the charity in its desperate need to paint the sleigh that has been hand built by local volunteer Patrick Edwards in his garage over the last six months.

Never ones to shy away from a challenge - and with less than two weeks to go before the charity needed to embark on its fundraising mission, Ranjit and his team took up the task.

He explained: “While we have taken on various strange requests before, spraying Santa’s sleigh is a first for us.

“By his own admission, the only thing Patrick had made out of wood before the sleigh was a birdhouse while still at school and while he’s done a terrific job, it still needed a lot of work to complete.  I explained to the guys what it was for and we all took the challenge to heart and have worked really hard in our down time to transform it into something I believe the community can be proud of.”

He added, “We couldn’t have done it without the support of Movac, our paint supplier. While we had plenty of the finest red paint in stock, we were struggling with the perfect sparkling gold needed to complete it. Movac went that extra mile and made us some to really set the job off perfectly. Once we explained what it was for, they did it free of charge. I can’t thank them enough.”

Patrick, said: “What Ranjit and the Fix Auto Slough team have done for is absolutely incredible. I’m a IT specialist and not a carpenter so to say I was way out of my comfort zone is an understatement but they have totally transformed my efforts into something really special.

“Our old sleigh was really well past its sell by date. Ranjit and the guys have made it look totally different. It really looks far better than I ever imagined.”

In order to maximise the publicity surrounding the charity drive, Fix Auto Slough also recruited a special little helper to complete the project by asking Will Taylor, a reporter from their local newspaper the Maidenhead and Slough Advertiser, to come down and literally lend a hand – by completing part of the spray job!

Will, who got into the spirit of things and even donned an elf costume, said: “What a privilege. As a truly local newspaper we always like to get involved in community-based projects and when the request came in to help with the sleigh I jumped at the chance. I’ve never sprayed anything before so I was a little nervous but Ranjit put my mind at ease and helped me every step of the way. I will always look on the sleigh with pride that’s for sure.” 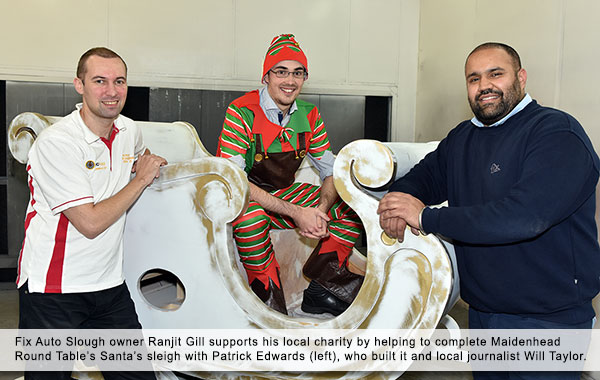