Five teams will be flying the Fix Auto UK flag during the three-day REAL Rally charity challenge which gets underway later this week.

Phil Whitaker and Steve Lawrence of Fix Auto Spalding along with Chris Oliver, Paul Cunningham and Neil Parker of Fix Auto Dagenham and Robert Dearnaley of Fix Auto Maidstone will all be taking part. They will also be joined by the network’s Head of Marketing Tom Hadfield and Head of Client Relations Jim Thomas, who are teaming up with Darren Bedford of Covéa Insurance and David Corner from AXA Insurance for the three-day journey.

The event has been organised to help raise money for REAL – the Ethan Rees Linwood Memorial Fund, with the funds going towards REALfriends, which supports bullied children in addition to REALexperience, which creates opportunities for 14-16-year-olds in the vehicle repair industry in conjunction with AutoRaise, the industry’s charity set up to help develop the next generation of car repairers.

Adhering to the event’s rules, each team has sourced their cars for under £1,000.  While each of the three bodyshops will be driving Mercedes’, Jim has opted for an ageing Audi Cabriolet while Tom acquired his car from closer to home after persuading his 86-year-old aunt to finally hang up her driving gloves and donate her 19-year-old Citroen Saxo to the cause.

Tom, said: “The Saxo is a great find. It’s nearly 20 years old but it’s got less than 20,000 miles on the clock. In fact, the most it has ever covered in a single journey is 50 miles. However, having driven it over the Pennines I have to say I’m not relishing the miles ahead for the REAL Rally as it really hit home just how far cars have moved on over the past 20 years.”

The starting grid for this year’s REAL Rally is at the Eurotunnel terminal in Folkestone. The fundraisers will then drive through northern France to the beautiful medieval city of Bruges in Belgium for their first stop over. From there, they will then head back into France to Le Touquet, before returning back to the UK on Friday. 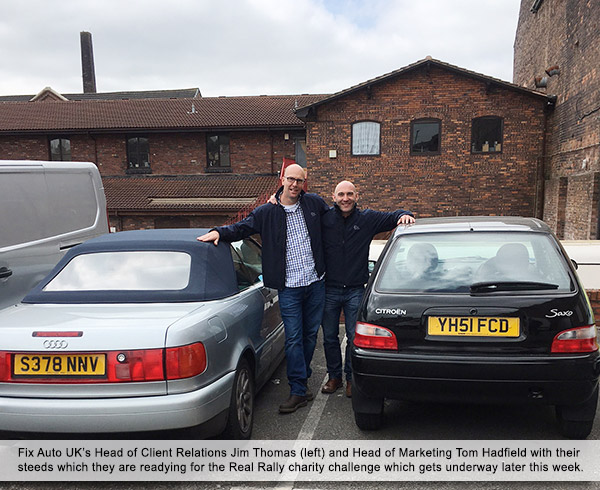