Fix Auto Wrexham’s Bodyshop Director Richard Edwards is urging all business owners to make sure teams are trained in first aid after his own swift actions helped save a colleague’s life.

Richard is speaking out after he and customer service advisor LLinos Evans were credited with saving the life of driver Roy Millington after he suffered a heart attack while driving to work.

Richard firmly believes had he and LLinos not attended a first aid refresher course shortly before the incident, they may have tragically lost their friend and colleague.

Richard’s actions were also acknowledged when he was named as one of BBC Radio 2’s Jeremy Vine’s Guardian Angels after 57-year-old Roy wrote into the radio show as a way to say thank you for saving his life.

Richard said: “Fortunately LLinos and I had undergone our first aid refresher training several weeks before Roy’s incident. We went into autopilot, our training kicked in and thankfully Roy has recovered to tell the tale.”

He explained: “Roy was about a mile away when he called saying he wasn’t feeling too well and he had severe pains to his chest. LLinos immediately called an ambulance. He assured me he was OK however when he arrived, he collapsed while trying to get out of the truck. That’s where our training kicked in.

“After around 40 minutes, the ambulance still hadn’t arrived and his condition was clearly deteriorating so I decided to drive Roy the hospital myself. With the ambulance control room on the phone talking us through what we needed to do, we made it and handed him over to the doctors.

“We honestly just thought we’d helped our friend, but the doctors said our actions had saved Roy’s life. It was only after the incident we realised just how severe the situation was.”

Roy had suffered a heart attack and has since had three stents fitted to his chest. He has now returned to light duties three days a week.

Roy said: “I can’t thank Richard and LLinos enough. If it were not for their actions, I have been told I wouldn’t be here today and for that I am eternally grateful.  Richard has played down his actions, saying anyone would have done the same but in reality it’s his first aid training that really helped me.”

It became apparent to Richard that despite being located on a modern industrial estate, there were no portable defibrillators, the devices that can help to restore a normal heartbeat by sending an electric shock to the heart. His landlord has now agreed to install some across the whole estate.

Richard added: “Thankfully, Roy is on the mend but the whole experience has been a massive eye-opener for us. During the conversations with the ambulance control room, I was asked whether there was a portable defibrillator nearby. To our amazement there wasn’t which is why I put him in my car and rushed him to hospital. Thankfully that is now being addressed.” 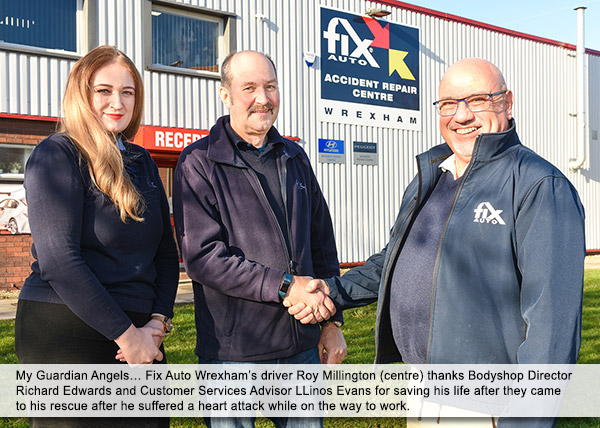