Determined to end the season on a high, Jac bounced back with two outstanding drives despite ever-changing weather conditions, enabling him to win both the second and third races of the weekend.

Jac said: “It wasn’t the easiest conditions I’ve raced in. In the third race of the weekend for instance, I started out on wet tyres before changing to slicks for a couple of laps when the weather brightened up and then out of nowhere heavy rain fell and I was sliding all over the place. Fortunately, my pace was still right up there, in fact I was the quickest on the track for most of the event.”

Summarising his weekend and season, he added: “A double win for a weekend and a third in the championship isn’t something we would have dreamt of achieving at the beginning of the season. We did no pre-season testing with the Radical at all so I didn’t expect to be anywhere near the front runners. We have worked hard as a team and learnt something new every time we have gone out on the track. To record a podium in the championship and two wins during the last weekend of the season, was a great high to end the season on. It was brilliant to also have some supporters from the Fix Auto UK family there with me this weekend, I’m glad we got two wins while they were there!”

Ian Pugh of Fix Auto UK said: “What Jac and his race team have achieved in their first season in the Radical Challenge Championship is impressive. They have built on their success in the Ginetta GT4 SuperCup and learnt a lot in the process. We all know Jac has ambitions of driving in the hugely competitive world of GT3 cars in the near future, his success this season should have further increased his driver profile. I am very pleased to see that he has done so well.” 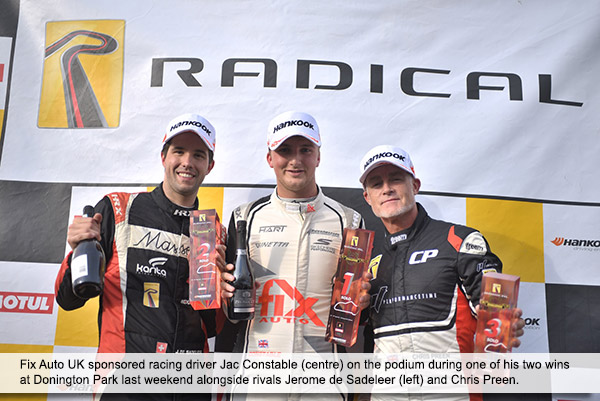