In the first of the three-race weekend, Jac showed his promise when he nursed his car over the line in third place only for its engine to blow as he arrived in the pits. With just two hours to go before the second race, his mechanics worked hard replacing both his engine and gearbox with just moments to spare.

Jac started the second race in sixth but made the best start possible and surged into second by the first corner and then overtook his championship rival, Dominik Jackson, at the final bend of the first lap to take the lead. He led for the rest of the race and took his second win of the season.

In the Radical Challenge Championship, successful drivers are handed time penalties in the final race to give other racers more opportunity and to promote more on track overtaking. Due to Jac’s success in race two, he had these to contend with in race three.

After these were taken into account, Jac was sitting in third in the final race when he was involved in a racing incident, resulting in him being nudged off the track and into fifth place.

“To finish third in the first race was amazing considering I was so down on power,” said Jac, “We realised while testing that our engine was due for a rebuild. Knowing we had to take it easy, we set the car up accordingly which meant I was down 5-10mph on power. Incredibly, as I came into the pits the engine gave up altogether.

“Then, it was a race against the clock. We just had to get the replacement engine and gearbox in the car in time for the second race which we just managed to do. When your team delivers in the way mind did, there’s only one way to repay them and I drove out of my skin to take the win.”

He added: “Things were going well in the third race and I was heading towards my third podium of the weekend when I felt a nudge and I was edged off the track into fifth. It’s a shame, it was ruled a racing incident. Though disappointed I can’t complain, that’s racing!”

Jac is third in the Radical Challenge Championship on 722 points, 85 points behind Dominik Jackson and 48 behind Jerome de Sadeleer. He will be back in action at Brands Hatch, Kent, on September 7. 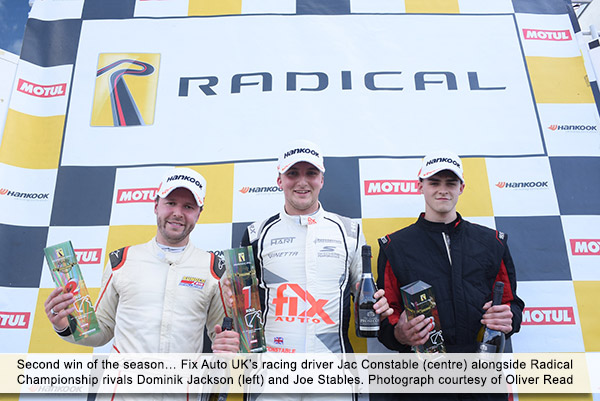