Fix Auto UK has acquired Fix Auto Henley-on-Thames, a move that takes the organisation’s number of wholly and part-owned repair centres to 10.

It has bought the business from long-standing, and highly respected, Franchise Partner Jamie Butler following his decision to step away from the industry altogether.

This latest acquisition follows the purchase of St Woolos Auto Repairs in South Wales from retiring owner Jim Haley earlier this year, though the takeover has not been publicised until now while a programme of much needed investment in the building, equipment and personnel was carried out to bring the business, which will operate as Fix Auto Newport, in line with the organisation’s high-operating standards.

Fix Auto Henley-on-Thames joined the network more than a decade ago, though Managing Director Ian Pugh has had close links with the Butler family since the early 1990’s, serving the business during his time as a field engineer for a major insurance company.

The bodyshop spans 18,000 sq ft over two units, hosts two spray booths each capable of holding light commercial vehicles, has 25 work-bays and is currently repairing more than 30 vehicles per week.

Commenting on the latest acquisition Ian, said: “I have long held a huge amount of respect for Jamie and his father, Colin, who started the business more than 50 years ago. When Jamie approached me saying he was stepping away from the industry altogether and offered us a first refusal on the business, we had to act.

“I know Jamie received considerable interest from other parties, but he was adamant he wanted the business to stay within the Fix Auto UK family which really does underline the commitment and loyalty he has had to the network.”

Ian added: “Newport was a strategic purchase. While we have two Franchise Partners doing a fine job in South Wales, we needed to provide additional support in the region. Strategically and commercially, while we have had to invest significantly in the business, Fix Auto Newport has provided a solution to our needs in the region.”

Jamie said: “My decision to step away from the industry that has been my entire life is common knowledge and I have received immense interest in the business. But Fix Auto UK, and Ian in particular, has been extremely supportive over the years and I really could not see another name above the door! I not only owed it to the network, but I also owed it to the team here who have been so loyal and dedicated to entrust the business in what I believe to be the safest of hands.  For me, that had to be Fix Auto UK.” 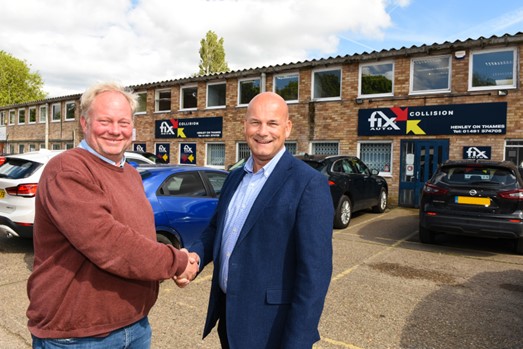 Caption: New era at Fix Auto Henley-on-Thames… Former owner Jamie Butler (left) who is stepping away from the industry, with Fix Auto UK’s Managing Director Ian Pugh outside the Berkshire site which is the 10th repair centre to join the network’s portfolio of wholly and part owned bodyshops.