Fix Auto UK celebrated its 10th anniversary by presenting Fix Auto Dagenham with a plaque to commemorate being the first franchisee in the country.

From that first signing a decade ago, Fix Auto UK has grown into a network of 77 independently owned bodyshops, supported by a 16-strong head office team, and has secured central agreements with a number of blue-chip insurance customers.

As for Fix Auto Dagenham, the business goes from strength to strength. A recent restructure of the workshop layout has put them on a firm footing for yet another record-breaking year in terms of productivity and turnover, and the business has just been announced as a finalist for Bodyshop Magazine’s Large Bodyshop of the Year Award.

Chris Oliver, Managing Director at Fix Auto Dagenham, said: “Prior to joining Fix Auto UK it was clear to me the industry was consolidating.

“Insurers - our key customers - were consolidating and becoming bigger entities, and it was evident they would want to reduce the length of their supply chains, which meant using larger groups rather than small independent repairers. Being part of a greater network, where your voice could be heard at the highest level, in my mind, was paramount if we were to survive and indeed grow.

“While Fix Auto was new here in the UK, we did our homework. When we considered what the business had already achieved elsewhere but more importantly, what potentially it could achieve here in the UK, it was a ‘no brainer’ and was just what we and many other repairers had been looking for!”

He added: “While we had every confidence in what Fix Auto could achieve, as the last decade has proven, my decision to join was clearly the right one.”

Dave Calder, Fix Auto UK’s Operations Director, who presented Fix Auto Dagenham with their 10th anniversary plaque, said: “The team at Fix Auto Dagenham have played a major part in the establishment and development of Fix Auto as a significant player in the UK accident repair market.  Chris, and his co-directors Paul Cunningham and Neil Parker, perfectly embody the Fix Auto principles of working together and innovation, and have worked tirelessly in collaboration with other franchisees to build a strong position for Fix Auto in the South East of England.  We are proud to work with this forward-thinking business, and are delighted to be able to recognise their longstanding commitment to the network in this way.” 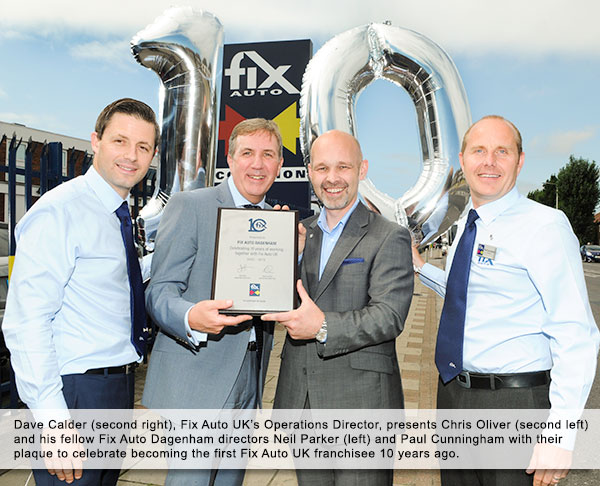