Fix Auto Chelmsford apprentice Lewis Williams maintained the network’s winning ways after being named as the industry’s Apprentice MET Technician of the Year during the Bodyshop Magazine 2020 Awards.

The 20-year-old scooped the accolade during the prestigious event, which was postponed from last year due to the pandemic and staged virtually with a live online broadcast to more than 450 people.

In addition to Lewis’s success, Rob Pugh, Head of Strategy and Communications for Fix Auto UK, officially received his award after being named as an industry “rising star” as part of the publication’s 30 Under 30: Rising Stars series created to recognise the younger generation within the industry. The 25-year-old was nominated for his outstanding work since joining Fix Auto UK’s senior management team in 2019 by Louise Woolacott, owner of Fix Auto Mid Devon.

Lewis, who has gone on to successfully gain his apprenticeship since the nominations deadline passed past last year, said: “I couldn’t be happier. When I heard my name called out, I just couldn’t believe it. I was obviously hopeful but you just never know. All I could do was my best for the judges.”

Danny Ashwell, Managing Director of Fix Auto Chelmsford, added: “We are absolutely delighted, as a business and especially for Lewis.  He has shown a natural flair for the job from day one and his skills are way beyond his years. He has worked tremendously hard and thoroughly deserves the award. As a business, it’s the first major industry award we have ever one so it’s extra special.”

“We have four apprentices within the team and have two more joining us shortly. Hopefully, Lewis’s winning ways is just the start.”

Simon Wait, Bodyshop Magazine Editor, paid tribute to Lewis’s skills and said: “The feedback from our judging panel stated Lewis had won his title by a country mile and his workmanship would have placed him as a serious contender in the seniors’ category. You really have to give him and the team around him credit for what he has achieved.”

Commenting on his award, Rob added: “To be named as one of the industry’s 30 Under 30 Rising Stars is a huge honour, made more so by the fact I was nominated by one of our franchise partners. 2020 was a year we all had many difficulties to face as we navigated through the pandemic and to have been recognised in this period makes it even more special.” 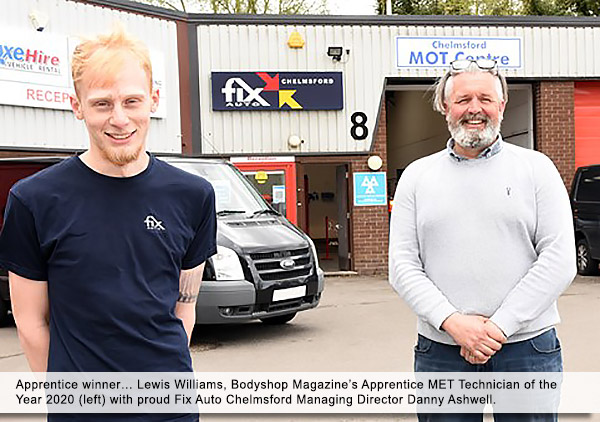 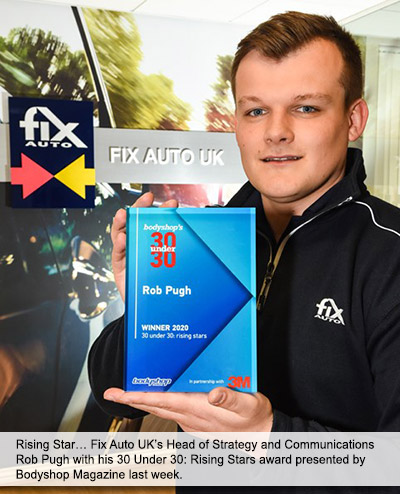