Fix Auto Deepcut’s professional HGV driver Mark Lee has raised more than £2,500 for charity by venturing abroad for the first time ever on an epic driving expedition.

Despite covering countless miles on UK roads during in his 30-year driving career, Mark, who is a delivery and collection driver for the Surrey-based repairer, had to buy his first passport to make this dream charity trip a reality.

Mark, who was accompanied by his son - also called Mark - breezed through the 4,660 mile round trip from Edinburgh, in Scotland to the Italian capital of Rome via France, Belgium, Holland and Switzerland.

The duo were inspired to raise the money for the St Evelina Hospital for Children in memory of Mark seniors’ granddaughter, Lilly Hope, who sadly passed away there aged just six days old.

Under the strict rules of the Rust-to-Rome event, the two Marks worked within a £500 budget to buy, renovate and prepare an ageing Toyota MR2 two-seater sports car. Fortunately, the hard work paid off as they successfully completed the trip, which saw them drive across some of the highest roads in Europe and stop off at the spectacular city of Venice, without a single hitch.

Mark said: “Losing Lilly Hope was such a tragic event in our lives. The care and attention we were given by all the staff at St Evelina left an everlasting impression on our family. They couldn’t have done any more for us and I’ve since vowed to do anything I can to repay them.

“While I have driven what seems like every inch of the UK, I had never been abroad, which I guess, is quite unusual today. When I saw the Rust-to-Rome charity event, I instantly knew I had to give driving on the ‘wrong’ side of the road a go!  Thankfully, my son was also up for the challenge.”

He added: “It was an incredible week and we made some great memories. I can’t quite believe it has taken me so long to head over there. However, one thing’s for sure it won’t be my one and only visit, as I’ve now caught the continental driving bug.”

Steve Knight, owner of Fix Auto Deepcut in Bridge Road, Deepcut, said: “Mark is a super guy, he’s part of the fabric here and we all really felt for him when he tragically lost his granddaughter. When he said he was doing this charity drive in her memory to help the hospital where she was treated, we just thought it was going to be a busman’s holiday for him. Little did we know that despite his vast experience, he’d never ventured abroad. You can only congratulate him, and his son, for their efforts.” 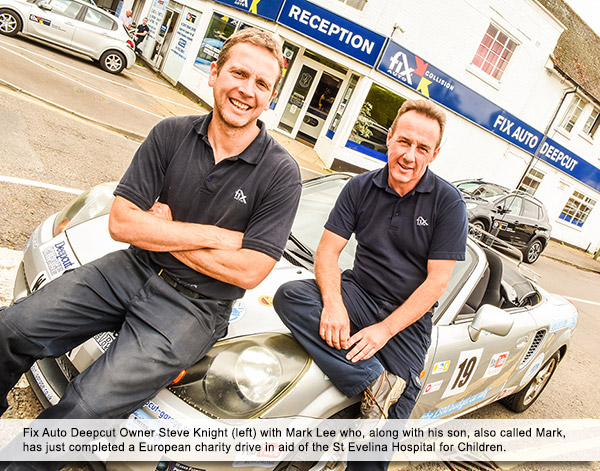