CHAMPIONSHIP BACK ON TRACK FOR FIX AUTO UK’S JAC CONSTABLE

The 20-year-old, who has experienced an indifferent time since stepping up into the Pro-class class after winning the AM title at his first attempt in 2017, stood on the podium in third place in the final race of the weekend. While content with taking his trophy, Jac was later promoted to second after the winner, Harry King was disqualified after the race.

It was Jac’s patience, determination and his skill behind the wheel that brought him his well-deserved success after he was “bounced off” the track in only the second lap of the first race. Jac then had to settle for fifth in the second race when the strategic decision to take care of his tyres forced him to ease off as he was pushing the leaders hard.

Commenting on the weekend, Jac said: “The success I achieved at Croft a year ago turned my season into a championship winning one, hopefully this repeat will again prove to be the catalyst I need to rise up the rankings.”

He added: “Until now, I couldn’t have got off to a poorer start. Firstly, I was taken ill at the start of the season and then, we have been struggling with setting up the car to eek out those extra tenths of a second needed to compete at the front of the grid. It has been steep learning curve but, as we proved at Croft, things are certainly going in the right direction.”

The next race on the calendar will be held at Snetterton in Norfolk during the last weekend in July. Snetterton is where Jac took the chequered flag for all three races last season.

“I’ve always performed well at Snetterton and I don’t see any reason now I’m in sync with the car again that that cannot continue. Next month’s race cannot come soon enough for me,” Jac concluded. 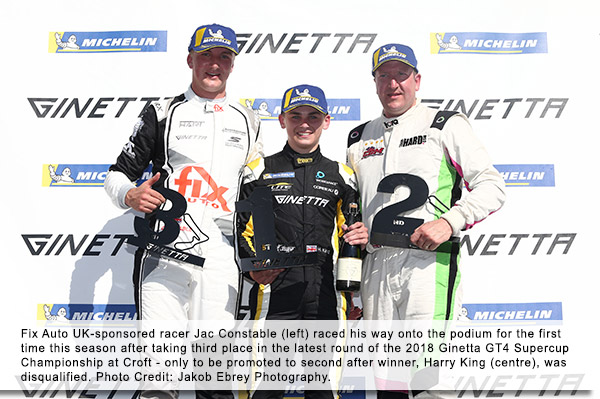