Fix Auto UK has strengthened its position in the North West with Greater Manchester-based Barlow Street Motors joining the network who will operate as Fix Auto Worsley.

The appointment arrives two weeks after Fix Auto UK announced the opening of Fix Auto Liverpool South and takes the number of Fix Auto-branded repair centres in the region to 10.

Fix Auto Worsley is another true family affair for the network. Headed by Managing Director Feroz Bhaloda and his Operations Director brother Idrish, 11 of the 15 workforce are closely related while a further three – accounts manager Amanda Schofield-Crook is married to driver, Johnny, and their daughter, Casey Jackson, is the customer service advisor.

Recruiting the new franchise partner has also marked another first for the network.  Due to the ongoing Coronavirus pandemic, all negotiations and liaising between Fix Auto UK and the business, including all elements of its stringent auditing process that has to be completed prior to joining, has been concluded online.

Mark Hutchins, Head of Commercial for Fix Auto UK, explained: “Due to all the restrictions placed on all of us at this time, visiting Worsley wasn’t an option and yet, Feroz was passionate about joining and becoming part of the network. We had no other choice but to go virtual which, although it goes against our usual personal services, worked out really well. My first site visit was to complete the contract signing process and we followed government guidelines to ensure complete safety for all.”

Mark added: “Feroz and Idrish run an extremely tight ship. The business has long been BSI approved - which is one of the perquisites when joining. The bodyshop is immaculate and really well managed. In truth, our audit process has been a formality.”

Formed in 2004, the repair centre covers 8,000 sq ft spanning two adjoining buildings. One used primarily for all panel work while the other for MET and all paint work.

While new to the network, the network certainly isn’t new to the Bhaloda brothers as they were originally introduced to the business by Fix Auto founder, Canadian Jean Delisle, during the early 2000’s. Feroz explained: “We have always known about Fix Auto, right from the early days. While we considered joining our business just wasn’t ready though we have watched it grow and develop over the years that have followed.

“COVID-19 brought home to us that you need to be part of a support system. We read how Fix Auto UK helped and supported the industry during the summer, from that moment we knew we needed to join and be part of it.” 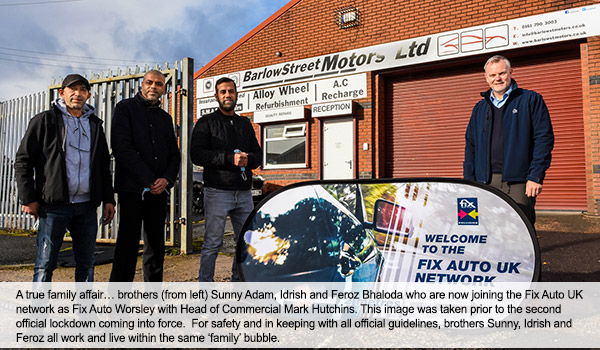