One year after the launch of Fix Auto China’s initial network of 78 locations in December 2016, the brand has doubled its footprint, now standing at 156 independently-owned collision repair franchise locations across the country. This strategic cooperative agreement, by which PICC recognizes Fix Auto as a national network and Fix Auto commits to delivering standard repair service, quality and rates, is the first of its kind for Fix Auto China. This partnership is an important preliminary step in developing a formal direct repair program with PICC, which could include referrals to Fix Auto locations.

Founded in Beijing in 1949 and handling approximately 20 million automotive claims annually, PICC is China’s largest provider of casualty insurance and has an extensive history of delivering client-centric insurance services to the Chinese population. "Our national strategic cooperation agreement with Fix Auto China includes policy sales, claims and the future development of a DRP in China. I am convinced that the collaboration between Fix Auto China and PICC will bring a new era for the development of the automotive aftermarket." said Zhang Haibo, General Manager, Auto Insurance Department at PICC, who co-signed the agreement with Frank Liu.

"Fix Auto and PICC share a culture based on quality service and customer focus and we are proud to enter in this partnership with them," said Frank Liu, CEO of Fix Auto China. "We believe our model and high standards of quality and ethics make this agreement a natural fit and we look forward to growing our partnership with PICC over time."

Fix Auto World President Steve Leal concluded: "This is a pivotal moment for Fix Auto’s development in China. This strategic agreement with the nation’s largest insurance provider not only underscores Fix Auto’s promise to grow strong insurance partnerships for its network through operational consistency, but places Fix Auto in a position to deliver reliable service to even more customers in China. Congratulations to Fix Auto China on this significant achievement."

ABOUT FIX AUTO WORLD
For 25 years, Fix Auto has been bringing forward-thinking independent automotive aftermarket repair shop owners together. In 2015, we created Fix Automotive Network, adding mechanical and glass to our portfolio with one clear goal: to help customers drive forward with confidence. With more than 2,000 franchise, retail, repair, affiliate, distribution and manufacturing locations in over 40 countries worldwide, Fix Auto World is the global aftermarket services network. For more information on Fix Auto, please visit www.fixauto.com. 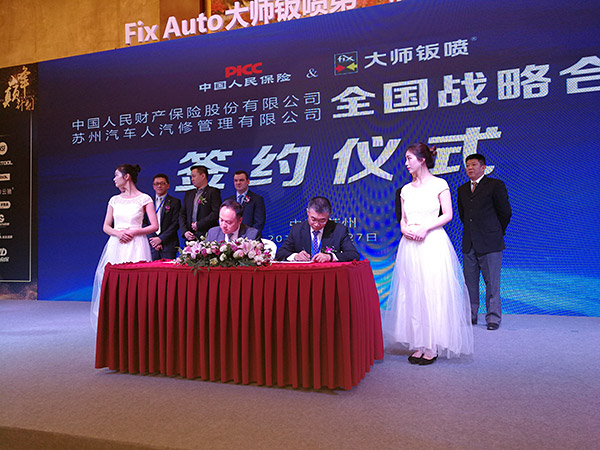