The tour, which attracted thousands of thrill seekers to events around the country earlier in 2018, will be flying into the SSE Arena in Belfast, the Genting Arena in Birmingham and the Fly DSA Arena in Sheffield from January.  The Fix Auto UK branding will be featured across all six rounds, including on the Freestyle Motocross jump in the centre of each arena.

This latest sponsorship announcement builds upon the national coverage Fix Auto UK has received by sponsoring race driver Jac Constable, whose on track action in the 2018 Ginetta GT4 Supercup Championship has resulted in the network’s branding being featured heavily on TV throughout the season.

Ian Pugh of Fix Auto UK said; “We are delighted to not only continue our Arenacross partnership, but to be the first partner announced for the 2019 series. The tour will be going to three major locations this year and our branding will be featured heavily throughout all six rounds. We had a brilliant response last year so I am looking forward the partnership continuing for the 2019 series.”

Matt Bates, promoter of The Arenacross Tour, added; “I’m so pleased to see Fix Auto UK increasing its involvement in the series following its first year with the 2018 Tour. With over 40,000 spectators visiting the Arenacross events annually, and an even bigger reach across its media, PR and advertising throughout the year, we’re just starting to see a wave of UK-wide brands realising the potential values of partnering sports entertainment events like ours." 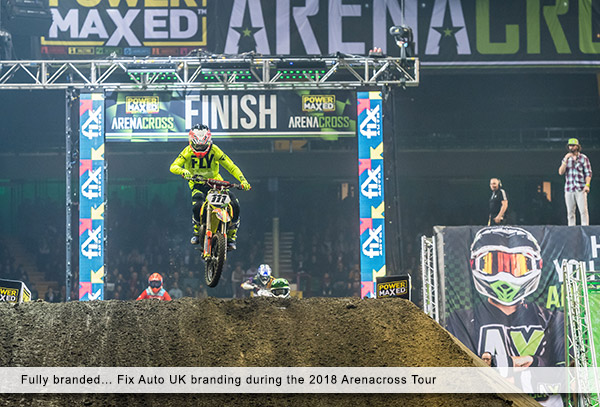