Fix Auto UK has further increased its foothold in the North West of England with Wilson & Co of Bolton becoming the latest bodyshop to join the network.

Now operating as Fix Auto Bolton, the appointment could not be more timely, as the centre is currently undergoing a major redevelopment as part of a £1.5 million investment programme spanning the entire three-acre new and used Vauxhall car dealership.

The group also includes main Vauxhall dealerships in Chorley, Scunthorpe and Grimsby along with a Kia dealership in Boston.

The bodyshop, which recently won the Vauxhall Bodyshop of the Year for Region 3 and was also one of the six finalists for the national award announced at the British Bodyshop Awards in May, is situated on Manchester Road, Bolton, and will complement the region’s established Fix Auto UK centres; Fix Auto Blackburn, Blackpool & Fylde, Manchester East, Northwich and Rochdale.

Bodyshop manager Kevin Simpson, who took over running the Vauxhall-approved centre 18 months ago, currently heads a team of five productives and a receptionist, who ensure around 120 vehicles a month are repaired.

As part of the on-going major overhaul of the site, the investment will see the complete re-development of the bodyshop and will include new offices. Plans are also in place to further strengthen the workforce.

Commenting on his rationale behind joining the Fix Auto Network, Kevin said: “Since taking over the day-to-day running of the bodyshop my objective has been to elevate the business into one of the region’s leading bodyshops, and being part of the Fix Auto UK network is integral to those plans. As part of our decision making process I visited Fix Auto Manchester East and, quite frankly, I liked what I saw and heard about the network.”

Kevin added: “I am extremely fortunate to have a great team around me along with a business owner willing to support every move I make in order to drive the business forward. While time and money is being invested in transforming our facilities and buying the latest equipment, it is imperative to have the very latest working practices firmly in place. I believe Fix Auto UK will assist in that area.

Ian Pugh, of Fix Auto UK, said: “Wilson & Co is a business that is clearly looking to the future with a major investment programme. I feel rather privileged that the business has turned to Fix Auto UK to help drive their ambitious plans.” 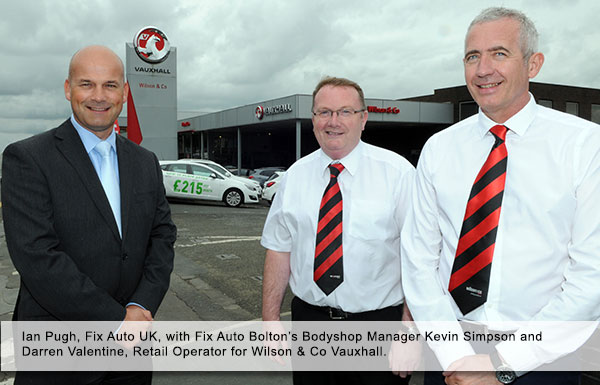