Fix Auto Stevenage has become the first Fix Auto UK franchisee to receive the manufacturer approval status for McLaren Automotive, enabling the Hertfordshire repair centre to now repair McLarens valued at anything from £150,000 to over £1million.

The achievement is the result of seven months of investment in specific training and equipment to gain the approval status and adds to their list existing list of vehicle manufacturer approvals that includes Aston Martin, Jaguar Land Rover and Kia.

Terry Gilbert, owner of Fix Auto Stevenage and chair of the Fix Auto UK’s National Leadership Team said: “Being appointed as an official repairer by McLaren is a fantastic achievement by all involved and is the result of months of hard work by the entire team here.”

He added: “Working on both JLR and Aston Martins over the last six years has helped to raise our game but when you’re handling McLarens worth upwards of £150,000, that has had to be raised even further, which is no bad thing as that level of workmanship filters through the entire workshop no matter what vehicle the team are working on.”

David Peake, Group Aftersales Director for the Cambria Group of car dealerships which nominated and sponsored Fix Auto Stevenage’s application said: “I have worked with Terry and his team for more than 14 years and during that time we have forged a great working relationship mainly through our Jaguar Land Rover and Aston Martin operations. When we opened a McLaren dealership in the area, I knew Fix Auto Stevenage would be the repairer for us to work with.

“Fix Auto Stevenage has invested heavily in the training and equipment needed to repair JLR and Aston Martin vehicles, adding McLaren to its portfolio for us was a natural progression. As you can imagine, when you’re handling prestige vehicles of such value, the workmanship along with the support from management and level of customer service has to be second to none. Terry and his team deliver that.”

Ian Pugh of Fix Auto UK, said: “What a way to end the year! McLarens are nothing short of works of art. To have a franchisee awarded this status is impressive but nothing less than I would expect from Terry and his team who I congratulate for this achievement. I am sure Fix Auto Stevenage is the first of hopefully many within the network to become McLaren approved.” 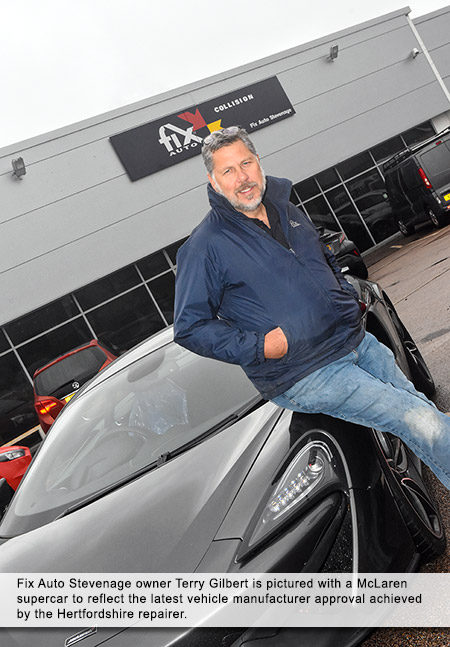