Fix Auto UK’s Ian Pugh presented Fix Auto Rochdale owners Phil and Wendy Ewbank with a plaque to commemorate a decade with the network – and the timing could not be more fitting with the repairer having recently announced a £1 million investment in his business.

Fix Auto Rochdale, which moved to its current site on the Eagle Way Technology Park 16 years ago, is in the final phase of developing a state-of-the-art Fix Auto Fix & Go express repair facility on a neighbouring site.

Phil, said: “Ten years ago we recognised that, if we were to continue to succeed and develop our car repair business, we needed to join an organisation that would provide independent repairers like ourselves with a major voice within our industry.

“While our LCV and HGV repair operation was well established and, I’d like to believe, has long been one of the leading operations of its kind in the UK, we needed to inject a whole new direction into our car repair operation and, a decade on, I can honestly say that joining Fix Auto has fulfilled those goals and more besides.”

In August last year, Fix Auto Dagenham became the first repairer in the UK to celebrate its 10th anniversary and has since been joined by Fix Auto Bradford, Cardiff, Keighley, Loughborough, Settle, Weston-Super-Mare and now Rochdale.

In presenting a commemorative plaque, Ian said: “It gives me great pleasure to be able to present this to Phil, Wendy and the team. While Fix Auto was firmly established in Canada and North America, you have to remember that 10 years ago the network was still very much in its infancy over here. Some would say that in joining Fix Auto, Phil and his fellow 10th Anniversary Club members were gamblers, while I say they were pioneers. It is because of their faith in the concept coupled, with their drive, commitment and ability that the network is succeeding today, and that should certainly be celebrated.” 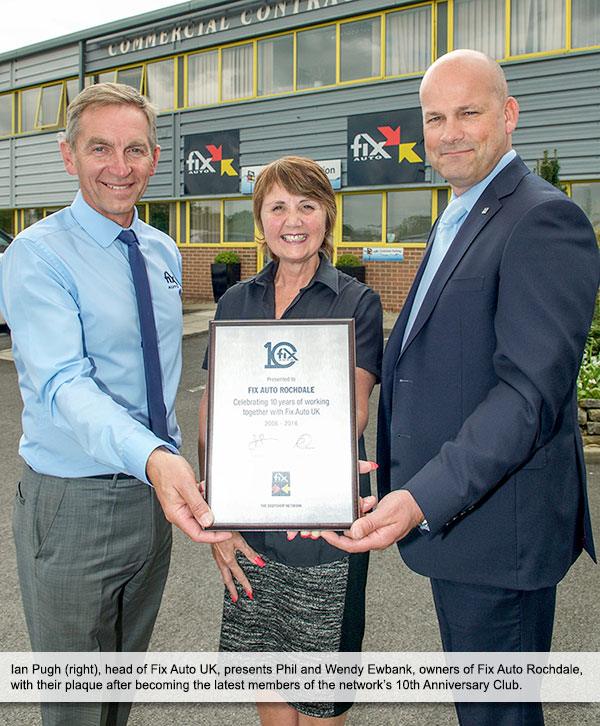